Network of The Living Dead 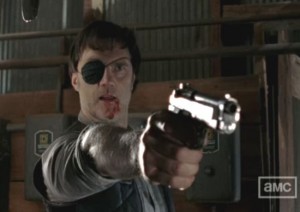 Nicotero continued, “Leaving Merle alone, and then Merle says, ‘I’m not going to beg.” And then, The Governor steps back in and raises the gun and says, ‘No,” and pulls the trigger. And the original intent of the scene was that you were actually supposed to believe for a second that The Governor was going to keep Merle alive, and Merle was going to watch him kill his brother, like he talked about briefly in [episode] 311. So there was a slightly different intent there.”
Please check out our articles SOURCE: COMIC BOOK.COM
Posted by News Command at 7:20 AM